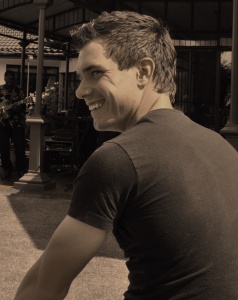 When I was at my YWAM DTS (Discipleship Training School) in Kalk Bay, Cape Town in 2008 – we went as a group to a church service when Jesus interrupted the sermon.  The pastor called me to the front and told me he had a prophecy – Jesus wants intimacy with me.  I never forgot that but never knew how.

In 2016 I went through a battle with cancer and steroid induced psychosis (psst article).

After surviving cancer in 2017 I read the Story of With by Allan Arnold and experienced God the Father as my Abba.  I felt like an adored child almost spoilt and for the first time I could rest and be playful knowing that my Abba was fiercely watching over me.  I  didn’t have to be on guard all the time.   I started to become alive and perform as me – knowing He was encouraging it.  And delights in me.

I then stayed two nights at a hotel in Bournemouth, before flying out to Zimbabwe in July 2017, when Jesus started wooing me in a playful way.  I was hooked and became rather girly and could think of no-one else.  I lay in bed watching Beautiful Outlaw by John Eldredge on Youtube to recapture who exactly He is.

I went to Zambia and Victoria Falls on holiday and showed the Jesus Film in a village and township.  I just wanted to have an adventure out in the bush with the Holy Spirit but instead it was me and an audience watching the most beautiful story ever told.  I hadn’t officially invited Him.

When I returned in August to the UK I was reading John Eldredge’s new book Moving Mountains and started praying the daily prayer for freedom from the Ransomed Heart site and Jesus told me the specific spirits to name that have been attacking me.  I was thrilled that Jesus was talking to me.

I wrote in my pink journal all my past encounters with God.  And finally it hit me – He has really been pursuing me.   I felt so shy.  How could I have missed this?  Who am I to be ignorant of His advances?  He actually wants me.

Over the next few days Jesus started to romance me.  He is so romantic and I’m not used to this – I’m getting giddy.  Words like – ‘I kept the sunset for you’ and ‘let me love you’.  Let me say – there is no-one more romantic than Jesus.

Then it happens – ten years after my prophecy – I experience intimacy with Jesus – it’s deep – it’s spiritual and it’s Holy.

I met Him intimately and could sense who He was and He is STRONG.  I’ve never met a strong man.  It is so attractive.  You can only but honour Him.

Immediately after – I met Him as King and He is SOVEREIGN. And I knew I will fall at His feet.  He is that Holy.  And so awesome.

And before I can get to grips with just who I am with – He immediately acknowledges I’ve had a hard life and then I felt His love – He is so KIND.

And He’s in my room.  And I’m under submission.

And then He leads me into repentance.  He is the most brilliant counsellor – He knows my history and is able to open me up about the shame I felt.  He then clarified with me how I was able to go through with the things I’ve done wrong.

Satan hates purity – He chains young hearts.  Jesus rescues you and brings you back to who you are.  John 10: 10 The thief comes only to steal and kill and destroy; I have come that they may have life, and have it to the full.

I wake in the morning feeling a little unsure.   I’ve fallen for His romance but I’ve also exposed my shame and yet I don’t feel condemned.  Then He tells me the truth about a childhood trauma I became aware of during a previous Sozo session (inner healing led by the Holy Spirit).   I have a brief moment to connect to that little girl and cry.  Then He tells me that I’m pure. I tell Him I can accept that He has forgiven me but I can’t see how I could be pure.  And ask Him if it is since I was baptised.  And then the most incredible moment – He laughs the most genuine – gentle, warm, kind masculine laugh and tells me I always have been.   Then He tells me He is ravished.  And I’m swooning.

And then the days of healing start – the Holy Spirit just went straight for my childhood.  He knows everything.  He has been watching over me my whole life.  And He is after my heart and Jesus is interceding on my behalf.  And this is a race and it is war.  Jesus wants my heart the enemy stole and Satan wants to destroy my mind.  The more spontaneous I become – the more unnatural I become to this world.

He told me to lean on Him and as His hand has been on me – I’ve been through the fire for ten months and come out (I wrote some of it in Arrest Jesus blog and Because I’m worth it blog).   And although sometimes it felt like I could go mad – I just couldn’t because Jesus won the battle with my heart.  Christ in you, the hope of glory.  Colossians 1: 27.  I have been set apart and I truly am being prepared for heaven.  I am fearfully and wonderfully made Psalm 139 : 14.

And now He tells me – I want you to want me.  He’s been the Warrior – the Romancer and my Maker – broken the chains off my heart and now He wants me to trust Him to show my love for Him with my whole heart and that it won’t be hurt.  It’s easy to be pursued but to allow your heart to admit genuine love is hard.   You can love your children from birth and not expect to be hurt but Jesus wants the same and more.  He is a jealous God Exodus 20 : 5.

I’ve been able to be vulnerable and open my heart and feel the deep love I have for the Holy Spirit and His love touches me there.  I’ve cried many times during worship when I’ve been in His presence but crying from a broken heart is alive.  It’s passion.  My heart was made for Him and knows Him intimately because it’s where I receive the things of God.

We won’t have these bodies but we will have our hearts.   He told me he will personally tell me my story.   Imagine Jesus Himself telling us our story which is written in the stars – from the beginning – we’ll be young and innocent again in new bodies.  He told me heaven can’t wait for its beauty.  That’s how beautiful our hearts are and that’s the war.  And it’s that serious.